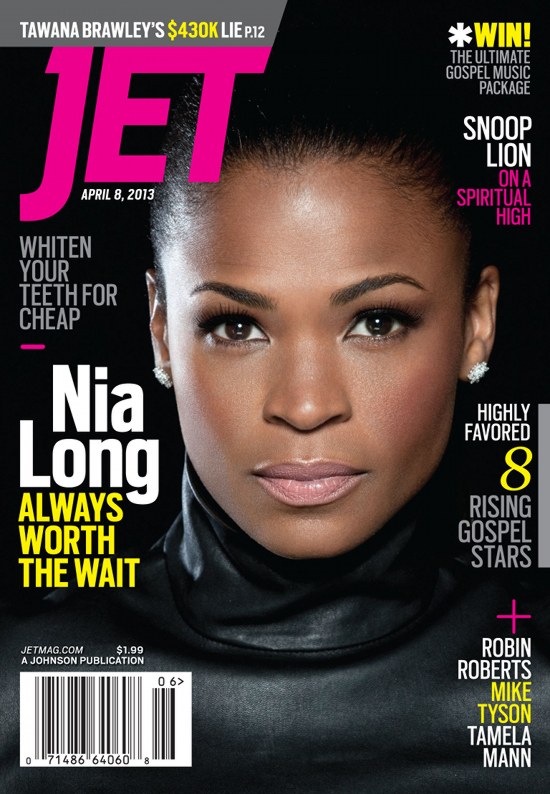 Nia Long is flawless on the cover of JET magazine

Long chats with the publication about the upcoming Best Man sequel, what her initial career choice was, and her love life.

Check out some snippets from her interview below. For more of Long’s interview, check out JET-Mag.com. The full interview with Nia Long, pick up the new issue of JET on newsstands March 18.

JET:  Everyone’s buzzing about you reprising the role of Jordan in The Best Man Holiday (out November 15). The original was definitely a classic film— but it’s been almost 15 years. Why do a sequel now?

We made magic together— so many people say that to me. And because I love the cast. The film’s director, Malcolm Lee, has been talking about it for some time and finally announced his plan during a recent cast reunion dinner.

JET: Any details you can dish on the movie?

Well, we’re not shooting until late April in Toronto so I can’t say much, but everybody is really excited to revisit our stories and find out what happens next. Where is Jordan now? Did she get married? Did she break up a relationship? It’s like reading a great book; you want to see what the next chapter is.

JET: You’ve been part of several iconic flicks, like Boyz n the Hood and Love Jones, but we hear that acting wasn’t always your dream career?

I wanted to be a pediatrician. One of the most life-changing challenges I experienced growing up was realizing that there simply wasn’t enough money for me to go to college. So I decided to focus on working. I promised that I’d give myself one year from the day I graduated from high school to make moves in the business. I was acting since I was 15, and I really wanted to help my mom, who was struggling.

JET: But your current career path isn’t necessarily the most stable…

That’s very true. Actors only have job security from the time we’re on set until they say cut. But, deep down inside I knew it would work out for me. Luckily, I was also naive. What’s the saying? Ignorance is bliss. I had a wonderful acting coach who didn’t focus on failure, only working.