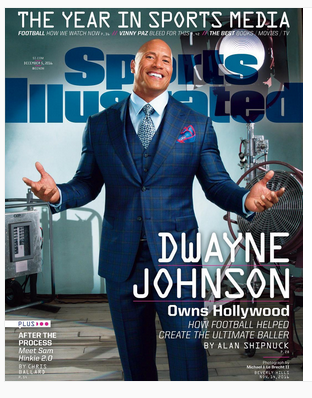 Johnson shared the cover via Instagram. He captioned the photo with the  following: “Grateful to share this EXCLUSIVE NEW COVER w/ you. Failure can be a cool & powerful thing.. When I was 15yrs old and started playing football, I had a dream that one day I’d play in the NFL and be on the cover of Sports Illustrated. Keep in mind, at 15, I also considered becoming a pro-boxer ’cause I thought I could be beat Mike Tyson who at that time, became the youngest ever Heavyweight Champ, so clearly my goals were extremely ambitious if not crack pipe level impossible. I failed to make it to the NFL (as well as got cut from the Canadian Football League). But my football failure created a drive that still pushes me today. Now years later THE COVER of @SportsIllustrated dream & goal was just achieved. Holy shit! (that’s the 15yr old in me talkin’;). At the end of the day, I want to surround myself with the hungriest and most brilliant team, because I never want to just play in the game, I always want change the way the game played. And thank God I didn’t fight Mike Tyson. #FromAthleteToCEO #ToTheCoverOfSportsIllustrated #SevenBucksProds #1Baller”

For more with Johnson, check out the new issue of Sports Illustrated or click here.

Posted on November 30, 2016, in ENTERTAINMENT NEWS. Bookmark the permalink. Leave a comment.