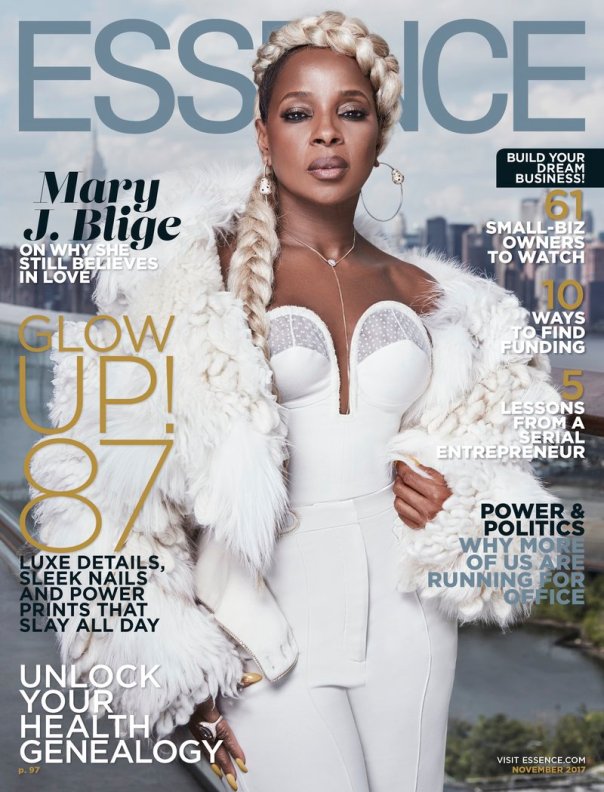 Blige can be seen sporting an all-white ensemble including a fluffy fur jacket.  Inside this issue, Blige discusses her upcoming NETFLIX film, “Mudbound” – a film set in the Mississippi Delta during the Jim Crow south era.

In the film, Blige plays Florence Jackson, a mother of four who faces several hardships due to the color of her skin, all while living on a saturated farm.

“Shedding Mary J. Blige for Florence gave Mary J. Blige some confidence… like a lot of it,” Blige told ESSENCE. “[On set] I could hear people whispering, ‘She’s so beautiful.’ And I was like, ‘Who the hell are they talking about?'”

Blige also reveals that she had to take on this role all while going through a very public, and sometimes nasty, separation from her husband of 14-years.

“I had just come back from performing on the Bad Boy Family Reunion tour with all the nails and the wigs, and I wasn’t trying to depart from that,” she admitted. “So when it came time to get into character, I was like, ‘Can I wear a lace-front wig? Can I get some lashes?'”

For more with Mary J. Blige, pick up the latest issue of ESSENCE magazine.  Check out the trailer for “Mudbound” below.

Posted on October 22, 2017, in ENTERTAINMENT NEWS. Bookmark the permalink. Leave a comment.