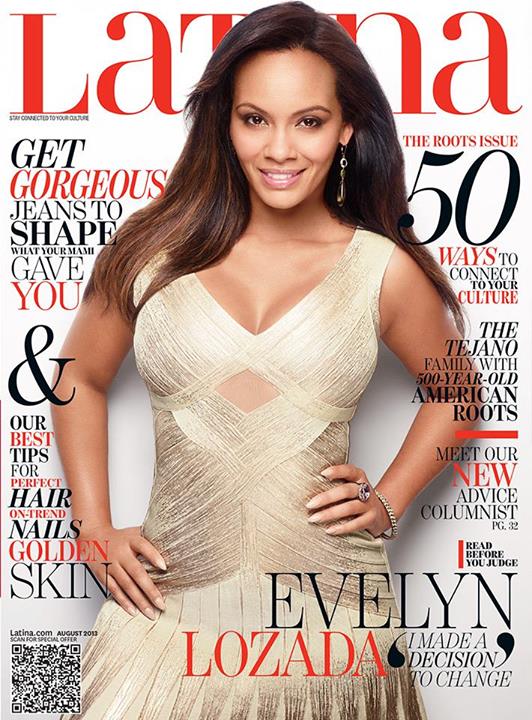 Latina‘s Facebook page has been inundated with messages criticizing the publication’s choice to put Lozada on the cover. Many see her as a bully and a bad representation.

However,  during her interview Lozada speaks candidly about the poor choices she’s made in the past, the abuse she faced at the hands of her ex-husband and the foundation she’s working on establishing.

On her feelings after the violent abuse of her ex-husband during an argument: “At that point, I knew my life would never be the same. I knew the world was going to laugh at me and be mean and nasty and blame me for everything. But I had no choice. I had to go to the hospital.”

On her behavior during the filming of Basketball Wives: “I’m not going to blame VH1—whatever I put out there, I put out there. When we were in the middle of an argument, I wasn’t thinking, ‘Maybe this is going to be hurtful.’ I was thinking, ‘You’re not gonna beat me in this argument!’ ”

On the public reaction that she somehow provoked her husband’s abusive behavior: “A lot of people connected my previous actions on the show to this. If they were talking about the incident on the news, there would be a clip of me acting a fool on Basketball Wives. I never lifted a finger at him.”

On why she plans to start a foundation dedicated to helping victims of domestic violence called Pain Is Not Love: “I get e-mails every single day from women who are still with their abusive partner and they’re like, ‘I need help.’”

On trying to reform her life with the help of life coach Tony Gaskins, Jr. and being re-baptized: “Tony was talking to me about soul ties, and I felt like I needed to cut that cord [with Johnson]. I wanted to do things differently, to start over. I’m still going to be Evelyn, but I have a different vision of my life.”

The ladies of Basketball Wives MIA cover the July issue of UPSCALE magazine. Shaunie O’Neal, Evelyn Lozada and Tami Roman pose in white for the cover, as they dish on their former cast mates (Jennifer Williams, Royce Reed) and much more. On how the backlash of their negative behavior affected them: “[It] was so difficult […]

Fans of the original Basketball Wives series will have to wait a little bit longer for the show to return.

Season 5 of the hit VH1 show was originally slated to return in the spring, but the show is now scheduled to return in August 2013. This means the show will have been off for more than a year before it makes its way back to television.

In other news, after pulling extremely low ratings last season. Rumor has it that VH1 has opted to cancel Basketball Wives LA.  The LA franchise only survived for two seasons.