Stacy Keibler is branching out.

She was once a famed wrestler, and now she’s giving dieting advice in the January/February 2014 issue of Natural Health magazine.

On her healthy packaging food company:
“I’ve been developing it for a while—I just keep modifying what I want to do. The main goal is to make convenient, healthy food for people 2 to 92. I’ve learned so much by researching what foods cause inflammation; I want to take those foods out but give people such good things to eat, they don’t even realize what’s missing.”

On her 21-day cleanse:
“It changed my life. I cut out night-shade vegetables, like eggplant and tomatoes, and didn’t eat any dairy or gluten. I saw the difference in my body, my energy and my mental clarity. Even the whites of my eyes were clearer. I’ve always been healthy, but this began a full health journal for me.”

On what she would tell first-time dieters:
“If you’re just starting, I say eliminate dairy and wheat. A lot of people who thought their external environment was the cause of their allergies see their symptoms go away when those foods are cut out. You can really get a sense of clarity and may reduce inflammation in your system.”

On what she uses as dairy substitutes:
“I don’t eat soy, so I use coconut milk or almond milk. I’m not a coffee drinker either—instead, I start the day with hot water and lemon. It’s very cleansing and healing and gets everything moving. And so inexpensive and simple!” 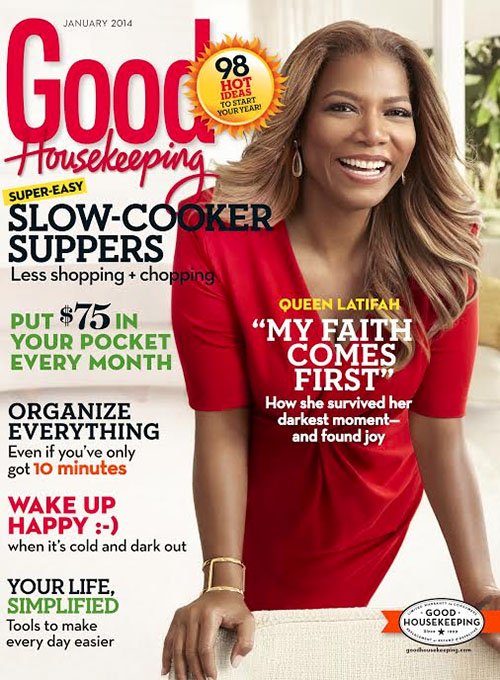 Queen Latifah is all-smiled on the January 2014 issue of Good Housekeeping magazine.

In this issue, the actress-turned-host reveals that she used alcohol as a coping mechanism. She also opens up about body and  her New Year’s resolution  in this issue of  Good Housekeeping!

On her brother’s motorcycle accident:
“My life was rocked to the core. Riding was one of the things Lance and I did together a lot. I had to get back on. It was like a [healing] potion.”

On her friend’s death:
“Drinking a bunch of alcohol, numbing myself [took the pain away]. Every day I would be faded, like a painting that was not vibrant, whose edges are dull. I wasn’t living my full life.”

On her New Year’s resolution:
“Taking the worry of the world on my shoulders is not right. My New Year’s resolution is to stay humble and be joyous, whether that’s spending time with family, hiking, driving around, listening to music, or playing with my dog. It’s so important to take care of ourselves that way.”

On staying positive:
“Accentuating the positive and eliminating as much negative as possible. I think I got to that place by not being happy with the other side – hating your body and criticizing yourself all the time. When I was around 18, I looked in the mirror and said, ‘You’re either going to love yourself or hate yourself.’ And I decided to love myself. That changed a lot of things.”

On how she views her body:
“For a lot of the things I’ve wanted to do in life, I haven’t looked typical. I was not born a size 2. I’m not skinny, period. I’m not willing to sleep with the director or step on somebody else’s neck to get the job.”

Julianne Moore is the November covergirl of HEALTH magazine.

In this issue, Moore talks about everything from her mother’s death, to her workout regimen.

Check out what she had to say to Health below!

On her workout regime:
“I try to do Ashtanga yoga two to three times a week. I’ve also started working out with a trainer, doing light weights and a lot of jumping around. The main problem is I can’t do anything six days straight because I get hurt. That’s the thing about old age – eventually your hip starts to hurt and you have to switch to do something else.”

On her mother’s death:
“I also had a period after my mother died where I couldn’t sleep. I mean, I was just in shock for the longest time and didn’t sleep for, like, a year. I was just a wreck. And I had some really intense acupuncture treatments, and it kind of reset my nervous system. So I think it’s very helpful.”

On her family’s diet:
“[They are pretty good eaters. They eat a lot of fruit- fruit’s easy – and certain vegetables. But my kids have always been allowed to have dessert. My husband thinks I’m too free and easy about that kind of stuff, but my kids will throw out a half-eaten ice cream cone if they’ve had enough, which I’ve never in my life been able to do.”

On her acting career:
“I can’t complain. I’ve been pretty lucky. And I think the more we talk about it, the more we make it real. I hate being asked this stuff! Let’s appreciate where we are. Let’s not wish our lives away.”

Just in time for the release of her new movie, Carrie, Julianne Moore covers InStyle magazine.

In the October issue, Moore chats with InStyle about her personal life, motherhood, and how her life has changed since hitting the big  5-0.

On her life:
“I feel very much in the middle of my life: being in a relationship for 17 years, having kids who are not babies anymore, living in the house we want to live in, and really enjoying the work I do.”

On being a parent:
“When your kids are young, they’re always holding your hand. Then suddenly you turn around and it’s not happening anymore. The days are long; but the years are short.”

On her career since turning 50:
“I can’t complain. I’ve been pretty lucky. And I think the more we talk about it, the more we make it real. I hate being asked this stuff! Let’s appreciate where we are. Let’s not wish our lives away.”

Net-A-Porter has released a new issue of its magazine, The Edit. And this time around, Supermodel Iman is on the cover.

Iman has always led a private life, but in this issue the model talks about how she keeps her personal business, just that…personal.

On her life after modeling:

On staying low-key and why her and husband David Bowie gravitated towards one another:

“The quiet part of it is intentional, because first of all I’m going to be 58 in July,” she says. “I wouldn’t lie about that, especially as a woman. So it has been a long career. Both David and I stay out of the celebrity thing. That’s why we gravitated towards each other, because we really feel that the personal should be separate from the professional. I’ve never had any members of the press in my home. Oprah [Winfrey] tried to photograph my closet. I said, ‘But it’s in the apartment and nobody steps in there.'”

On how her weight-gain gave her a fresh-face:

“My natural weight is 130 pounds and I’m 142 now. I was 160 when I was pregnant, so it’s a little too much for me. Still, I call it natural Botox. I look at myself in the mirror and I’ve never looked younger. It’s the weight I have put on,” she says. “In the west, we have become accustomed to needing to lose weight, right? But as we get older, for women especially, it makes us look a little haggard. So my consolation about this weight is that it’s given me a fresh face. The rest of it, I’m sitting on it.”

On living in NYC, but staying out of the spotlight:

“I still take my little girl to school,” Iman says. “David picks her up. It’s easier than any place we’ve ever lived. People are too cool to bother you.”

Supermodel Jessica White is gearing up for her Fourth Annual Angel Wings Foundation event. White be hosting the event at Georgica during Memorial Day weekend on Sunday, May 26. Tickets for the event are on sale now, so please see below for details on how you can attend! “Jessica White is once again spreading her […]

Rihanna is about to go rogue. The “Stay” singer s working on her fourth fragrance, a scent that will be called Rogue. Her first three fragrances -Reb’l Fleur, Rebelle, Nude– all had the same packaging, but this new scent will have a brand new look. And according to Rihanna, the women’s scent will be released […]