Say goodbye to Snooki! In the newest issue of Us Magazine, a source close to the show revealed thatMTV plans on revamping and recasting The Jersey Shore. “After this group comes back from Italy and shoots season 5 this summer, that will be the end for them.” The current cast makes approximately $100,000 per […]

Jersey Shore star Nicole “Snooki” Polizzi covers the latest issue of Rolling Stone magazine.  Snooki cam be seen straddling a rocket wearing white hot pants, a shirt tied at her midriff and cowboy boots. Check out some snippets from the interview below.

Watching herself on the show: “If I do something stupid, which is pretty much the whole time, I hate it. I just hate it. Obviously, they’re only going to put the good stuff in, and the good stuff is us drunk, so all I’m seeing is me drunk and falling down.”

Future plans and goals: “What I’d like is to turn out like Jessica Simpson, with her whole brand. She makes millions…I’m trying to build an empire, because after this I can’t get a normal job. I mean, how do I go and sit behind a desk?”

Being filmed 24/7: “We can’t have cellphones, TV, radio or the Internet. If the president died, we’d have no idea. There’s no normalcy. It’s just like a prison, with cameras.”

Sex during the show: “The guys you see me bring home, we’re only cuddling and making out like any other person would do, but we’re on camera and the whole world’s seeing it, and it does look like I’m having sex.”

This issue of Rolling Stone hits newsstands on Friday, March 4.

Singer Christina Milian and her daughter Violet hit up the American Music Awards Gifting Lounge thus past weekend in Los Angeles. Milian and Violet stopped by  Ubisoft’s Just Dance 2 display and dd some dancing of their own. Check out some pictures of mommy and baby below.

Nicole Polizzi AKA Snookie will be appearing on a special Halloween episode of Fashion Police. And what better way to welcome the Snookster than by having Joan Rivers dress-up as the Jersey Shore star.

To see Rivers make a fool of herself,  tune- into Fashion Police tonight at 10:30 p.m.

Paul Delvecchio, AKA “DJ Pauly D” was in the Magical Kingdom on to announce a new project on october 22, 2010. Delvecchio playfully fist pumped and posed with “Goofy” in between business. The Jersey Shore store announces his involvement as one of the performers for Disney Grad Nite 2011. 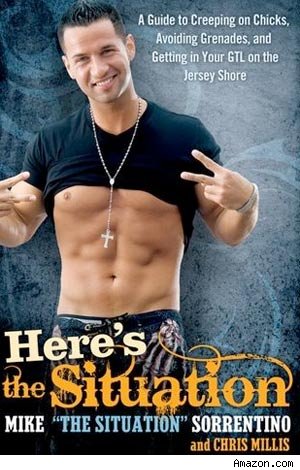 Looks like The like Michael “The Situation” Sorrentino is making a name for himself. The Jersey Shore star has finally released the artwork for his upcoming book, ‘Here’s the Situation: A Guide to Creeping on Chicks, Avoiding Grenades, and Getting in Your GTL on the Jersey Shore.’

Bristol Palin will be “Dancing with the Stars”

Bristol Palin, daughter of Sarah Palin, is set to join the upcoming cast of Dancing with the Stars, reports EOnline.com.

According to the website, Palin is set to compete against David Hasselhoff, Audrina Patridge, Jersey Shore‘s “The Situation,” and singer Brandy Norwood.

The eleventh season of Dancing with the Stars  kicks-off on September 20.

ABC must really be running out of candidates. Kristy Alley and Dirty Dancing‘s Jennifer Grey are also rumored to be a part of the new cast.