The singer chats it up with Marie Claire Australia about parenthood and whether or not she wants more children. Check out some excerpts below.

On life before motherhood:
“It’s different. I used to stay up till 4 o’clock in the morning on the Internet, drinking wine, smoking cigarettes, wake up at noon, roll out of bed, got to the gym. Now it’s foot-on-face here, hot breath… it’s just awesome. It’s exhausting and it’s terrifying and it’s the best thing that has ever happened.”

On wanting more kids in the future:
“I don’t want to do the baby stuff five times, but the idea of, like, a holiday with five kids fighting and me just sitting at the head of the table cracking up, pouring more wine, I just love that idea. I love the idea of all the chaos.” 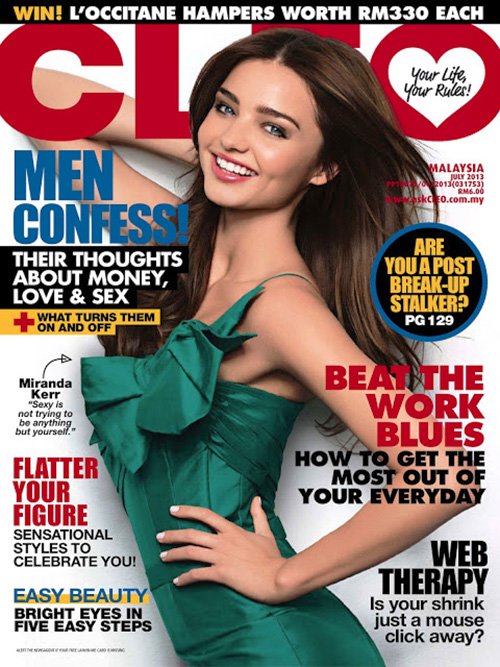 According to Kerr, “sexy is not trying to be anything but yourself,” and there’s no doubt that this model knows what being sexy is.

In this issue, Kerr dishes on juggling motherhood and her career, raising her son on an organic diet, sex appeal and much more.

Check out what she had to say to Cleo below!

On raising Flynn on an organic diet:
“Life is about a balance so you do the best you can. I try to be 80 percent health and 20 percent indulgent. There are a few indulgences. It depends on my mood and on the day. I studied nutrition so I am very passionate about health and well-being. I like to start my day with a cold pressed organic juice and so does my son – which is amazing! He loves it. But it is also important to be happy. So if you are having a meal with friends and they are serving pasta, then enjoy. Eat the pasta. Don’t deprive yourself of those little luxuries.”

On managing modeling and time with Flynn:
“It’s called planning. For moms at home I say, when you are with your child it’s important to really be with them. Switch off your phone and really connect with them, and just love them. They are such a lot of hardwork but they are so much fun. For, me, one of my favorite things to do is turn the music on and dance around. Another favorite thing is to just be in our garden and investigate. Flynn will be like, ‘Oh mommy, what’s this?’ And I will say, ‘Oh that’s moss, or that’s a butterfly.”

On what she loves about parenting:
“Everything. My son is the best thing in the whole world. He’s just so charming and he his his own little individual personality so if I can just give him the best nutrients and the best environment for him to grow up in and support and nurture him, then that is all you can do as a mother.”

Kanye West is just days away from releasing his sixth studio album, Yeezus.  The rapper has been in the media a lot lately for his rants, run-ins with signs and for dating a pretty well-known reality star. But now, he’s more focused than ever. West sat down with The New York Times, for a […]

Gospel duo Mary Mary have taken over the June issue of EBONY magazine. The sisters –Erica Atkins-Campbell  and Trecina “Tina” Atkins-Campbell – open up to the magazine about their personal life and future career plans. With two seasons of their reality show Mary Mary in the can, these two are riding high. The sisters […]

Mommy-to-be, Jenna Dewan-Tatum is proud of her baby bump. The actress is featured in the May 2013 issue of Glamour magazine. In this issue, Dewan-Tatum discusses adapting to her pregnancy bod,  and what it’s like to married to hunky actor Channing Tatum. On how she views her pregnancy body: “I thought my body was going […]

Jill Scott Poses with Son for EBONY Cover [May]

Jill Scott covers a special issue of EBONY magazine. Just in time for Mother’s Day, the singer poses with her adorable son Jett. In this issue, the songstress discusses everything from motherhood, sex-appeal,and much more. On raising a child by yourself: That I-can-do-it-by-myself mentality is a lie. I’m sorry if I hurt anybody’s feelings, but […]

Toya Carter looks golden on the cover of the latest issue of Rolling Out magazine.  The reality star looks regal, almost like a statue in some of her pictures for her feature. In this issue, Rolling Out speaks with Ms. Toya about  motherhood, relationships and men needing to step their game up.  You can read some of the interview snippets below.  And is it me, or does it look like there’s a wind machine blowing on Toya in one of the pictures below.

People thought Tiny and I were gong to do a baby momma show. They only knew that I was married to Lil Wayne. But once we did season 2, they knew more about me. My life has changed, and I’m more in the public’s eye. I hear from people who are inspired by my story. I didn’t do the show to bash Lil Wayne or be labeled the mother of his first child. I will always be attached to him, but I’m doing things to better myself such as the TV show, my book and opening a clothing store.

I just feel like women just go so hard. They give their all so fast. They give 100 [percent] and don’t get that in return. Relationships [are] supposed to be equal. A lot of women didn’t grow up with the affection from their dad. So, when they find a man, they expect that man to give that to them.They look for love in all the wrong places. They never had their fathers around to say, I love you, and you’re beautiful. So, the first man to tell them, I love you, and you’re beautiful, they fall for it. That’s the biggest problem. They throw themselves on a man all the time and say, I got him. That [doesn’t] work.

her daughter being “grown”-

When you have kids at a young age, your kids tend to grow up with you. So, as I was learning, she was learning, which is why she is wise beyond her years. People see my daughter and say, She is so grown. We were learning together. I couldn’t just put her off on everybody. That didn’t stop me from being a mother. I told her when she was born, I’m going to give you all I didn’t have and more.Love your kids listen to them, hear them out. People say, If you didn’t have it, you can’t give it, but that’s not true. I didn’t have [anybody], but I’m trying to be there for my daughter. talk to me because I didn’t have [anyone] to talk to.

men needing to be more respectful and stepping up their game –

Men have to be more respectful. This generation is just so disrespectful. They think it’s corny to open a door for a woman and just be polite. What goes around comes around. What you put out, you will get back