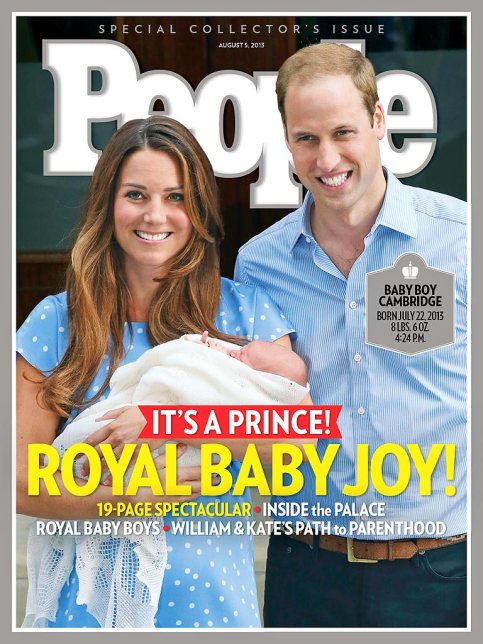 PEOPLE has decided to commemorate the birth of the Royal baby by releasing a special collector’s edition.

The cover (above) has one of the viral photos of Duchess of Cambridge with Prince William and the would-be Prince.

The issue contains remarks from Prince Charles, the extended family,  the baby’s big reveal,  visits from the grandparents and of course some exclusive details and photos of William and Kate’s first days as parents.

This special issue of PEOPLE hits newsstands on Friday.

Prince William and Kate Middleton have been married for almost 4 -months now and what better way to keep the memory alive, then with replica dolls. The Kate doll is sporting a replica version of the dress the real Kate Middleton wore on her wedding day and the Prince William doll is wearing the same scarlet Irish Guards colonel uniform. The dolls went on sale in London, on August 18.

Arklu, the British firm that makes the collectible offerings,  says the dolls are “instantly recognizable and, some might say, delightfully kitsch.”

The resemblance is definitely uncanny. Check it out for yourself below.

Pippa Middleton has garnered a lot of attention since the wedding of her sister Catherine and Prince William.  Now Pippa Middleton is making a nae for herself and doing so in a big way. Middleton graces the August 2011 issue of Tatler magazine, a UK-based magazine. this has to be the most interesting magazine […]

The Duke & Duchess of Cambridge‘s Vanity Fair magazine cover has finally been unveiled. The July issue features an up-close shot of Kate Middleton and Prince William.

The cover photo was taken by photographer Mario Testino at William & Kate’s engagement at St James’ Palace back in November 2010.

This special issue focuses on the couple hunting for a new home, who does what in the household, and much more.

This issue of Vanity Fair hits newsstands on June 3rd. The couple will be making their way to Canada and the U.S. (namely California) in July.

Where To Buy It: Kate Middleton Inspired Wedding Down From JS Collections 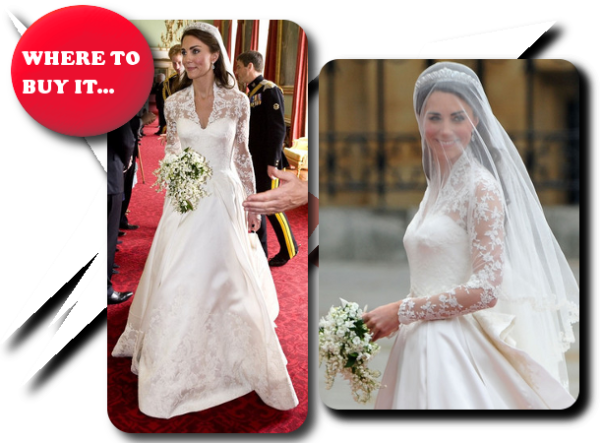 The wedding dress of Catherine, Duchess of Cambridge has been the talk of the town for weeks. Women swooned over the Alexander McQueen gown and began their own search to find a gown that looked similar. Now, Nordstrom is giving pending brides the opportunity to look like royalty. JS Collections has designed their very own ‘Duchess’ wedding gown. The gown can be pre-ordered via Nordstrom.com. The gown will ship or be available for pick up in-store after September 15.

The dress is the spitting image of the gown Kate Middleton wore during her wedding ceremony to Prince William, Duke of Cambridge.  One great thing about the gown Nordstrom is selling, is that the dress is available for plus-size women as well sizes range from 0-16. The dress is only available in Ivory for the time being, so if you want a white wedding dress, then this is not for you.

Check out the dress specifics below.

Duchesse satin fashions a royalty-inspired wedding gown designed with a corseted bodice and a beautifully full, pleated skirt. A delicate lace overlay creates the long sleeves while also shaping the demure collar and low, scalloped V-neckline. The removable bustle is fashioned with dramatic folds at the lower back before flowing into the three-foot train.

The highly anticipated Royal Wedding of Prince William and Catherine Middleton took place at Westminster Abbey on April 29, in London, England. Nearly, if not more than, 1900 guests attended the wedding,  including foreign Royal family members and heads of state. David Beckham, Victoria Beckham, Elton John and Guy Ritchie were some of the famous faces in the crowd.

The wedding went off without a hitch and both Kate and Prince William looked fab! Michael Middleton, walked his daughter Catherine down the aisle. While Prince William’s brother, Prince Harry, served as his best man. Check out some of the pictures from the ceremony below.

Now that an official Prince William and Kate Middleton coin has been issued, let’s just hope the wedding goes through without a hitch. The face value of the coin is  five British pounds sterling, which is about $8.12 USD.

The coin was unveiled this past Thursday, and is the latest special issue coin from the Royal Mint. The design of the coin was approved by the bride and groom-to-be before being sent to George Osbourne, the Chancellor, for approval.

Prince William’s grandmother, Queen Elizabeth II,  gave the final approval of the coin.  The other side of the coin has a portrait of the Queen herself.

To commemorate the wedding of William and Kate on April 29, the  coin will sell for nearly 10 pounds, ($16 USD).

The coin doesn’t seem to do either one of them justice in the looks department and it seems as though many agree with my assessment.  British tabloid the Daily Mail had this to say about Middleton “looks somewhat toothy, while her 28-year-old fiancé has more hair on his head than has been suggested by recent photographs.”