Pharaoh is known for his hilarious parodies of West on SNL, so it’s only fitting that he take things to the next level by re-creating one of the emcee’s songs.

In the video, the comedian dresses up like a dog and raps to a song called “I Am A Dog,” which is a play on West’s song, “I Am A god” from the Yeezus album. On top of writing hilarious lyrics as a dog, Pharaoh’s delivery shows that he’s a pretty good rapper.

The parody was written by Pharaoh, with Caroline Chewning serving as producer.

Fat Joe Turns Himself in to Prison for Federal Tax Evasion Rapper Fat Joe, whose real name is Joseph Cartagena, turned himself in Monday to begin serving  a four-month prison sentence.

The 42-year-old emcee plead guilty in December after failing to pay income taxes in 2007 and 2008. The total income owed was more than  $1 million.

The “Lean Back” rapper is being held at the Federal Detention Center in Miami. According to TMZ, he will have to pay a $15,000 fine and serve an additional year under supervised release.

Drake is all-smiles on the cover of the July issue of GQ magazine.

In an article titled “How to Drake It In America,” rapper Drake chats with GQ magazine about his career, family, what keeps him motivated and the simple things in life. The “Thank Me Later’ emcee even reveals his thoughts  on that infamous feud with Chris Brown.

“You notice they don’t criticize the music itself, though,” says Drake about his detractors. “I’m okay with that.”

On feeling like a boxer before a main event:
“You know the way fighters don’t fuck before the fight?” he says. “Sometimes I feel like I’m so focused on training my body and getting my mind right to create this album that sex isn’t one of my main priorities. If someone is around that I know and trust, I’m down. But I’m not going to end up with some stranger at this party.”
On his reservations about playing big venues:
“I fully accept I’m an arena-touring act,” says Drake. “When I’m writing, I’m thinking about how the songs are going to play live. Fifty bars of rap don’t translate onstage. No matter how potent the music, you lose the crowd. They want a hook; they want to sing your stuff back to you. That’s why on this album I’ve been trying to condense my thoughts to sixteen-bar verses. There’s something to be said for spacing out the lines, to infiltrate people’s minds.”
On mending his broken relationship with his dad:
It’s an emotional process,” Drake says. “My father is an incredible man—charming, talented, and stylish—and I’m sort of living the dream he had for himself. But his actions served as that reverse role model for me. There are a lot of things that I don’t ever want to do. I don’t want to miss years of my child’s life. I don’t want to put a woman on a roller-coaster ride.”
On the Chris Brown feud:
“I hear he has everything he could want now,” Drake says. “I don’t want my name to be synonymous with that guy’s name. I really don’t. I wish we could sit down, just like you and me are right now, and talk it out man-to-man. But that’s not going to happen. I’m not confrontational, but if someone challenges, I’m not going to back down.”He continues, “It’s embarrassing, the amount of media coverage,” he says. “Two rappers fighting over the woman. He’s not even a rapper, but still, it’s the last way you want your name out there. It distracts from the music. But he’s made me the enemy, and that’s the way it’s gonna stay, I guess.”
Read more over at GQ’s official website.

Gucci Mane Gets Arrested One-Day After Being Released

Gucci Mane  can’t seem to stay out of jail. The rapper was arrested on March 26 for  allegedly assaulting a man with a bottle in an Atlanta nightclub.  He was originally denied bail, but the judge had a change of heart and on April 11, he set Mane’s bail for $75,000. He was released from […]

Lil Wayne is finally speaking out on what has been causing his seizures over the past few years. Weezy explained, “The bad news is I’m an epileptic. I’m prone to seizures. This isn’t my first, second, third, fourth, fifth, sixth, seventh seizure.” He continued, “I’ve had a bunch of seizures, ya’ll just never hear about […] 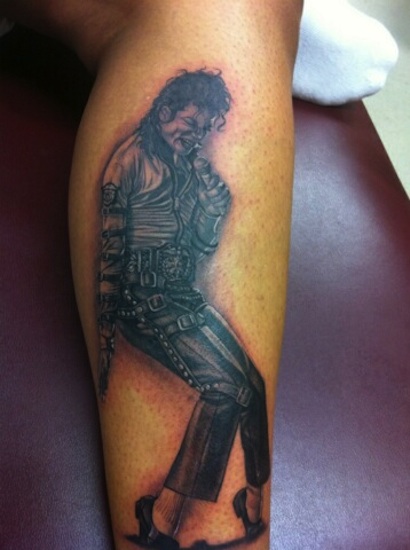 Rapper Da Brat was in prison when The King Of Pop, Michael Jackson, passed away in June 2009. After serving a 3-year bid in prison for assaulting a Hostess in an Atlanta night club, the rapper was released in March. Jermaine Dupri tweeted a link to the picture of the tattoo (shown above) on Da Brat’s leg. Even if you aren’t a MJ fan, you have to admit that the detail on this tattoo is sick!

Da Brat is planning to release some new music as well as a autobiography called “Insubordination” in the coming months.

“The book is pretty much about my life and lot of things that I have been through that nobody knows that I have been through, except the people close to me and my family,” Da Brat told The BoomBox in March. “I think it’s a great book. It’s probably going to end up being some type of movie. I’m not trying to brag on it but everybody who reads it, they can’t put it down!”