Taylor Swift has gone from CoverGirl spokesmodel to an actual  cover girl. Swift graces the cover of the June 2011 issue of InStyle magazine. In this issue, the Country singer opens up about the topic of love. Although she’s been linked to a few men in Hollywood, Taylor doesn’t care what a guy does for a living.

Check out a snippet of what Taylor had to say about love below.

“There are no rules when it comes to love,” Swift told InStyle. “I just try to let love surprise me because you never know who you’re going to fall in love with. You never know who’s going to come into your life—and for me, when I picture the person I want to end up with, I don’t think about what their career is, or what they look like. I picture the feeling I get when I’m with them.”

“I have this really high priority on happiness and finding something to be happy about,”

This explains why Taylor’s always making those love songs. Might I add, it’s refreshing to see her without the Shirley Temple-like curls. She’s blossoming int a gorgeous young woman.

Jennifer Lopez continues to shines as People magazine has named her the “World’s Most Beautiful Woman!” The feature includes an exclusive interview with Lopez, where she talks about everything from motherhood, marriage and of course her career. Jennifer Hudson, George Clooney, Sandra Bullock, Zac Efron,Jessica Alba, Hayden Panettiere, Beyonce and Angie Harmon are just ome of the other well-known celebs that made the list.

Here’s a little bit of what JLO had to say to People.

From her skincare regimen to her grueling workouts and portion-controlled diet, Lopez says she makes a concerted effort to stay in top form. “The thing is, it’s part of my job,” says the singer, who ran a triathlon six months after she gave birth. “I don’t want anybody thinking it’s easy. It does take time and it’s hard work. HDTV wide-screen is nobody’s friend!”

Lopez, 41, also has learned valuable beauty tips over the years, and says daughter Emme is starting to prove she’s her mother’s child. “She is very girly-girl, just like me since I was very little. She loves for me to paint her nails,” Lopez says. “She lays out her clothes on the floor like I do with my stylist and she’s like, ‘This matches very good!’ ”

And what about son Max? “He wants to paint his nails too. Because for him, it’s just paint. He’s like, ‘I want the blue!’” Lopez says, laughing. “Then Marc is like, ‘Why are Max’s nails painted?!’ But he won’t sit still so it’s only like two nails.”

As for being called a “diva,” she says, “I kind of like it. We’ve kind of owned it now. But I certainly don’t like and I’ve never been a person who has what they call ‘diva behavior,’ which is something they tried to pin on me for a long time.”

Spice Girl Mel B. Is Pregnant!

Melanie B. AKA Scary Spice announced in the new issue of  Hello! magazine that she and husband Stephen Belafonte are expecting their first child together.

This will be  Melanie’s third child–daughters Phoenix, 12, and Angel Iris, 3 are from previous relationships–and the second child for Stephen, who has a 6-year-old daughter named Giselle.

“We’re really thrilled,” the 35-year-old pair told the magazine. “We wouldn’t have planned and waited for four years to have a baby if we weren’t excited and ready for it.”

Upon hearing the news, the two celebrated with Mel’s last glass of champagne

Mel is no longer in her first trimester.

“The first three months, I was pretty sick and tired, to be honest, which I’ve never been before,” she said.

Brown even thanked her fans via Twitter for all the blessings and warm wishes. She said, “@Stephenthinks1 and I want to thank everyone for all there positive supportive well wishes, we are just over the moon xx,” she tweeted this morning.

Brown and Belafonte don’t know the sex of their child and hasn’t decided whether or not they will find out before the little tike makes his/her appearance.

Mel is due sometime this summer. 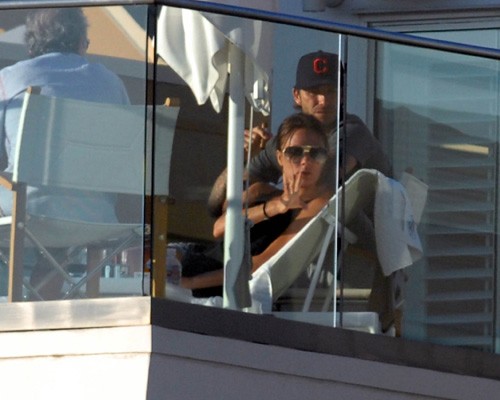 The Beckhams,  David and Victoria, spent time with their adorable children at a beach house on August 20, in Los Angeles.

The two were very relaxed as they smoked cigars and soaked up some sun on their balcony. Even though the duo were spending some quality time, they didn’t hesitate to speak to another couple nearby.